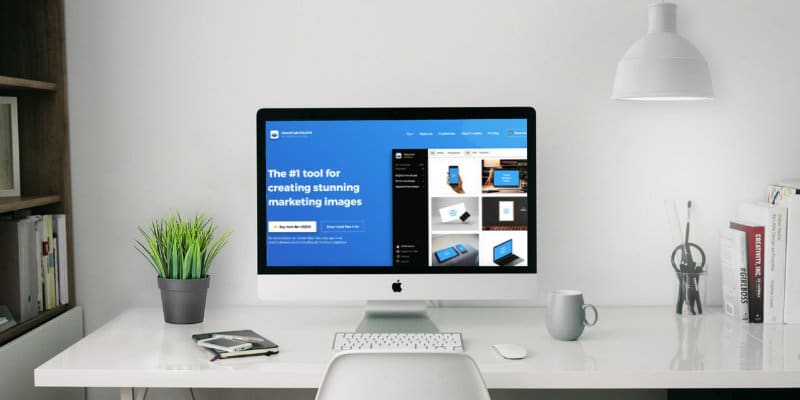 Product mockups are great for online marketing. You can use them to show off your t-shirt designs, on sales pages, as a social media graphic for Pinterest or to showcase your app or website. The problem is they are a pain to create. Most people either turn to their ‘go to’ designer or spend a frustrating 30 minutes designing a graphic in Photoshop.

At least that used to be the case with me. Thankfully that’s changed; modern mockup generators allow you to create your designs in house.

What Are Mockup Generators?

Mockup generators are a software solution that allow you to easily insert whatever image you want onto a design without needing any design skills. A classic example is the three-click insert of your product and logo onto a 3D box, or a screenshot of your website onto a laptop, like on the image below.

More modern mockup generators do basically the same thing, except you can insert Gifs within the product mockup or even add whatever you want, say the logo of your company, into a video. It’s a really smart way of advertising that helps put your product in context, which is why these solutions are so popular.

To help you choose the best mockup generator we created a shortlist of the products currently on the market.

You can scroll through the post and read a longer review of each of the product mockup generators below. Keep in mind we tested each product on this list. Hopefully this means our reviews give you more insight and will help you make the best choice. We’ll start with my favourite mockup generator.

The platform is really easy to use with 112 mockup templates to choose from. These mockups cover every conceivable type of situation. Like the other tools on this list you can insert and image you want into a mockup with a click of a button. There are also handy cropping features so you can make sure your image looks just right.

Mockzign is a part of Zsuite, which is a graphics toolkit that incorporates all of the Zign graphics tools. This will cost $47 a month when it’s live. However, it’s still possible to buy a lifetime version of Mockzign for $60 (rather confusingly the sales page says $40 and $50, but the checkout page is $60). If you want to get access to a lifetime version of a mockup generator this is the deal for you. Act fast though if you want to secure the offer, because it’s unlikely to be around for long.

The functionality of the software depends on the price plan you’re on. The free plan gives you access to a stock library of 200 product mockups, though the app has limited functionality. The Premium account costs $9 a month and the team plan $29. For being a paying user you get access to 700+ product mockups, plus some cool extra features. This include the ability to grab a screenshot of a url and place into any mockup in one click, crop images and export in one of four sizes.

Compared to the competition SmartMockups is one of the best product mockup generators around. You can create unlimited product mockups as a free or premium customer. Plus the software is being constantly updated with new features and graphics. You can read our in depth review of SmartMockups here.

DropMock was created by a team of Internet Marketers. It’s as versatile as a Swiss Army Knife. You can use DropMock to create demo videos, Image Mockups and a scene generator (this last feature is not available with the other mockup generators on this list).

Compared to the one time price used by Smart Mockups Dropmock is expensive. Subscription costs $45 a month or $297 a year. If you want some versatility in your mockup create – read create mockup videos – it’s worth signing up to DropMock. Otherwise just get Smart Mockups (it’s cheaper after all).

PlaceIt was one of the first product mockup generators. It has the largest library of images to choose from (2800+ images and growing). Like DropMock you can use it to create product mockup videos. Unfortunately the pricing is very steep, with unlimited video downloads costing $199 a month!

The only positive thing about the pricing for PlaceIt is that you can pay by the image. This is helpful if you need to create a product mockup once in a blue moon. Given the high price point and the great alternatives there is no other reason for using PlaceIt.

Overlooking the silly name for a moment (seriously, if you can’t get a good url don’t just start adding random extra letters and expect people to remember it!)… Mockuuups is a desktop based product mockup generator for Mac and PC. The software comes with 300 ready to use image mockups and uses the same one click import solution as the other software options on this list.

Unfortunately Mockuuups just isn’t as good as the other premium software solutions on this list. The developers charge $9 a month for access to the software, which is fine but… Mockuuups doesn’t let you create mockup videos like the other paid options on the list. Also they have a smaller image library than Smart Mockups.

While I’ve spent most of this article focused on premium iPhone, tablet and other mockup generators, it would be rude not to point out there are a bunch of great ‘mostly’ free options. A few of the good ones include Dunnnk, MockDrop and MockupsJar (there are more options available, but these are the best of the bunch).

The free mockup generators are basic. They don’t have large libraries of mockup images to choose from, after all they are free. However, it’s a lot easier to use one of these solutions to create a custom mockup image than booting up Photoshop.

There are a lot of great mockup generators on the market. My favorite for images is Smart Mockups. It’s a great product with a really large, and ever expanding, library of images and an intuitive user interface. For video mockups I recommend Dropmock. Again, a great selection of video mockups.

I'm an online marketer with a passion for travel. Every week I research the best lifetime software deals, from sites like AppSumo and StackSocial along with independent developers, and post them on the homepage of Launch Space so you can get easy access to them.